The island of Java and Bali is the best destination for tourists to spend the holiday season , many travel options ranging from mountains , sea , art and culture of the area . Especially Banyuwangi and the island of Bali , have a place that is famous in the world . Some options like the famous Mount Ijen crater , Plengkung famous for surfers with the largest wave number 2 in the world after Hawaii , and Kuta beaches . Hopefully we can give the best vacation memories with us for escort entrust your holiday travel .


A regular visitor to visit the region since the early days with the goal of seeing the rising sun. To see it, you have to climb Mount Pananjakan which is the highest mountain in the region. Terrain that must be traversed to get to Mount Pananjakan a rugged terrain. To reach the foot of Mount Pananjakan, you must go through a desert-like area that can make you get lost. When I had to climb Mount Pananjakan, narrow streets and lots of sharp turns would require a high driving skill. To that end, many visitors who choose to rent a car hardtop (a type of jeep) driven by the surrounding community. Surrounding communities coming from Tengger tribe friendly to the visitors. 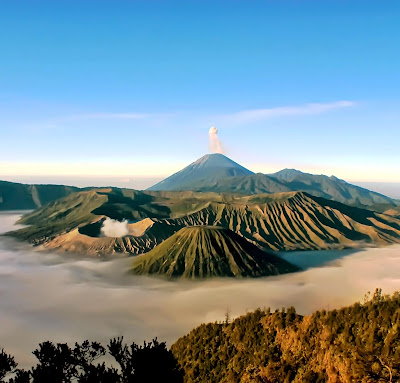 Up above, there are many shops serving coffee or hot tea and a bonfire to warm up while waiting to be sunrise. There is also a shop that rents warm clothing. Watching the sunrise is an interesting event. The proof, the visitors are willing to wait since 5 o'clock in the morning facing east so as not to lose this moment. You were not always able to see this event, because if the cloudy sky, the appearance of the sun is not visible clearly.....

Here there is a place that is so beautiful and it is always tempting to visit, crater Ijen. to be able to reach the Ijen crater there are two paths that the north and south lanes. When choosing a passing lane south, from Banyuwangi journey to the village of slippery then proceed to Paltuding with a distance of 35 km with a mileage of 1.5 hours. And if tourists choose the north path means we are departing passes Situbondo, towards sempol pass garduatak Wonosari, then proceed to Paltuiding that can be achieved with a distance of 93 km and takes about 2.5 hours....

The island of Java and Bali is the best destination for tourists to spend the holiday season , many travel options ranging from mountains , sea , art and culture of the area .Especially Banyuwangi and the island of Bali , have a place that is famous in the world .Some options like the famous Mount Ijen crater , Plengkung famous for surfers with the largest wave number 2 in the world after Hawaii , and Kuta beaches .Hopefully we can give the best vacation memories with us for escort entrust your holiday travel .


Based on the book Occult History of the Land of Java, written by CW Lead beater, Moulds March 1st, 2015, stated, ON 2,000 years before Christ (BC), Java Already a colony of the Atlantes, BUT Java Currently Being Destroyed Atlantis separate country.Well, While Still dominated Posted nation Atlantis This is the Doctrine of the unseen black and misguided Starting taught the residents living on the island of Java initials.So that the effect of misguided flow ITU then got stronger and destructive to the life of the here and now. The cruel gods they worship Yang Always ask for offerings of Human and Life Under Tyranny Without a shadow of a chance to review the Self release. In those days, they ruled concurrently Posted king The Priest Of Flow black ITU. THERE BETWEEN husband king in a Truly Rabid black hearts Flow Trust ITU. The king has the conviction that only WITH practised in Trust The expense of Blood Every day, the area can be saved from destruction. It initials based on belief that the gods malignant and thirst for blood that Yang holds control of Java differences at that time. The gods has been proving its tremendous force WITH volcanic eruptions repeatedly And Other Natural Disasters. The king then decided to do a review of A magical fencing in order to review Still Maintain and nurture Protection differences Java. One way to practise witchcraft From the Wizard. It initials do so later ALL worshipped gods Blood To Blood thirsty entrenched in whole Java Fixed continued at Throughout the Ages Coming will be.


The purpose for the creation of ITU, he then created Spells are very strong differences of Java so black That was followed the flow will not disappear forever. Effect of IT, CAN Still Seen Neither BY ether's or astral hearts Shape The Dark clouds hover in the big differences Java. Black clouds husband, strangely looks as if tethered Certain ON dots, so NO Then the wind Posted And Stay Stay ON place. Spots LOCATIONS black cloud is intentionally demagnetise Posted king, Near WITH craters of the volcano. One of the reasons is because the craters are usually occupied Posted Various Creatures TYPE fine. Creatures so magical THAT MAY ruled Posted singing king. Then the year 1200 BC ON THE Peace Happen Invasion Against Java Posted king Vaivasvata Manu The Hindu.They come in peace Stay ON Beach And finally forming city Small Trade The Tbk.

History story of Magical Land Java concomitant time, the strength of Hindu migrants is increasing rapidly and ultimately became dominant in the community.But although Hinduism has been accepted by the population, but in reality the old cult against heresy go ahead and occult practise even more flourishing. Seeing the condition of the king Vaivasvata ruling was requested to send an expedition to Java in the year 78 AD. This expedition is done to counteract the bad influence of a cult that has been grounded in the land of Java. The leader of the expedition is led by a spiritual expert named Aji Saka or Sakaji. Aji Saka is very understanding of the task at hand. Aji Saka and plant objects that have a strong magnetic power given spell in seven places on the island of Java to get rid of the influence of black flow from the land of Java (victimising the land of Java). For a place to bury the casualties or the talisman of the most important and powerful, Aji Saka chose the hills that lead to the Progo River, a place very close to the point of the island of Java. The legend about Aji Saka in various stories are also considered to symbolise the arrival of the Dharma (the teachings and Hindu-Buddhist civilisation) to Java.
However, another interpretation is that the word comes from the term Saka Javanese Saka or Soko means essential, base, or the origin, hence its name means "king of origin" or "first king". This myth tells about the arrival of a hero who brought civilisation, order and regularity to Java. Because Aji Saka has defeated the evil king, King of Gods Cengkar the black mastery who was then mastered Java.the legend also says that Aji Saka Saka year is the creator of dates, or at least the first king who apply the Hindu calendar system in Java. Aji Saka to counteract victimising black Power Hidden lasted until hundreds of years later. To arrive at a situation where the genie back in power, raining blood everywhere, rampant disaster. At this time there developed multiple streams of magic in Java among others, kejawen, occultism and mysticism. Then in the early 13th century came a cleric Sheikh Subakir Turkish Ottoman Empire sent to Java. Subakir sheiks was a great scholar who was sent to menumbal of Java from the negative influence of the spirits at the beginning of the spread of Islam in the archipelago. (Read: The Story of Sheikh Subakir, Penumbal Tanah Java) Because Sheikh Subakir determine the condition of Java Island influenced many supernatural elements are very disturbing. Then, Sheikh Subakir bring the black stone of the Arabs who had inscribed. Then, with the intercession of its black stone with the name of the Kalachakra Rajah Aji Because , mount tidar believed to be a central point or nail Java. The results are unseen forces that interfere in Java can be driven . At this time mysticism evolved into several branches , namely , The medicine , kawaskitaan , magic , kanuragan , immunity , grace , as well as the power . Then after nothing Sheikh Subakir unseen fencing against negative influences followed by the Wali Songo . The trustee is to teach the teachings of Islam . One of them the famous Sunan Kalidjaga . Allah nature bishawab

Identity fauna City and County in East Java
A full list is set to be a mascot animal (fauna identity) cities and districts in the province of East Java are as follows: